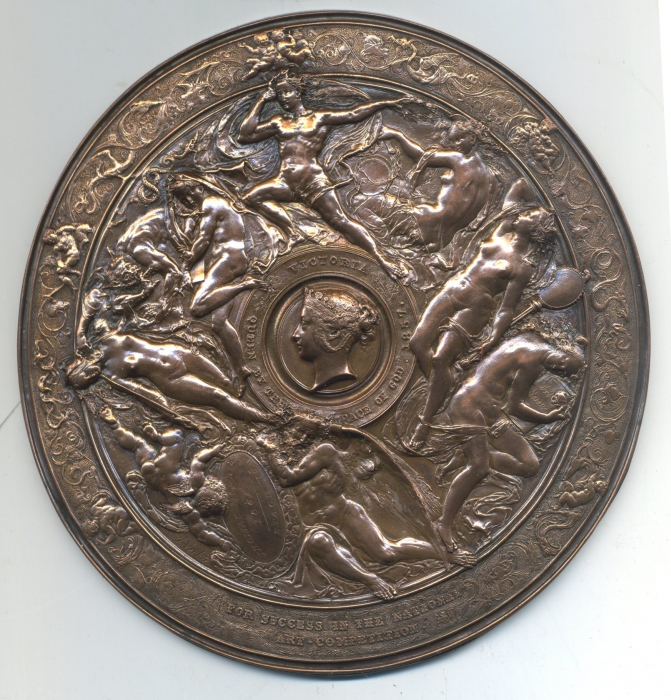 Dulwich, Thomas Morris, Artist, , a group of three cased medals and three books formerly the property of Thomas Morris of Dulwich, the first the National Art Competition prize, 1861, by Vechte, along with two South Kensington, Department of Sciece and Art, Queen's Medals, by William Wyon, 1856 and 1859. Also a South Kensington School of Art, book prize, 1860 and two booklets published by Morris from The old College, Dulwich Village. The medals are all engraved to him, and contained in their original cases. . All in fine order. THE GROUP. £Sold

Thomas Morris,(1830- 1911).Artist and writer. He never grew taller than 3 foot 4 inches and made a record of Dulwich, which he called his "dear old village" with both paint and pen.

The family had been in Dulwich since at least 1785, being born at a house near the old burial ground where his parents had a greengrocers and milk business. Although a talented violinist, his real talent was as a painter, as can be seen from these medals.John Ruskin befriended him giving him lessons in painting and Morris said of him that"I received many kindnesses from him and gifts of money from him to buy paints and brushes". His oil paintings and watercolours of the village record Dulwich as still a rural area. He began sketching when looking after his mather's cows. He gave his paintings to the South London Gallery, where they still are. His final years were spent at the Old College Almshouses, now known as Edward Alleyn House, from where he published his pamphlets.