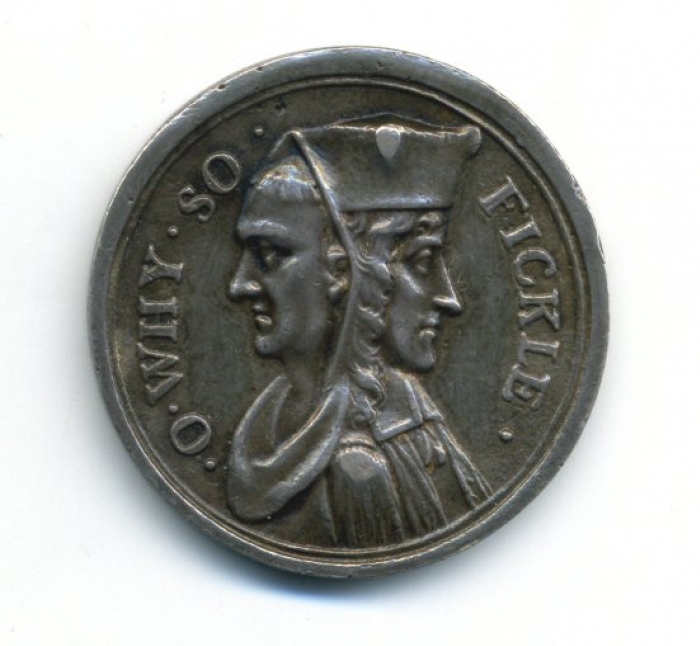 The faces on the reverse maybe those of Lord Clifford, Lord Ashley, the Duke of Buckingham, Lord Arlington and the Duke of Lauderdale, all members of the King's cabinet sometimes referred to as the Cabal, an acronym of their names.

The Popish Plot was part of a conspiracy against Catholics. The two main protagonists were a pair of corrupt clergymen, Titus Oates and Israel Tonge, who in 1678 claimed to have uncovered a 'Popish Plot' to murder Charles II and replace him with his Catholic brother, James. Such claims might well have been rejected out of hand, but for two co-incidences which occurred at this time and lent credibility to their case. The first was that Edward Coleman, one of the conspirators and also Secretary to both the Duke and Duchess of York, had actually been in treasonable correspondence with France; the second was the murder of Sir Edmund Berry Godfrey, the magistrate before whom Titus Oates swore his testimony. Godfrey's body was found strangled at the foot of Primrose Hill. The Gunpowder Plot and the widespread belief that the Fire of London had been started by Catholics, led the public to believe their suspicions were justified. A wave of paranoia swept through the nation and plots and sub-plots abounded. This was fuelled by the financial slump of 1678 to 1679 and the consequent unemployment in London. As a result, the Whigs, led by the Earl of Shaftesbury, won a great majority in the House of Commons and passed the "Exclusion Bill" in an attempt to keep James from the throne (although the bill failed in the House of Lords). James was forced into exile. It was later discovered that Oates and Tonge had lied and the Whigs, having capitalised on near civil war, then suffered a decline in popularity.