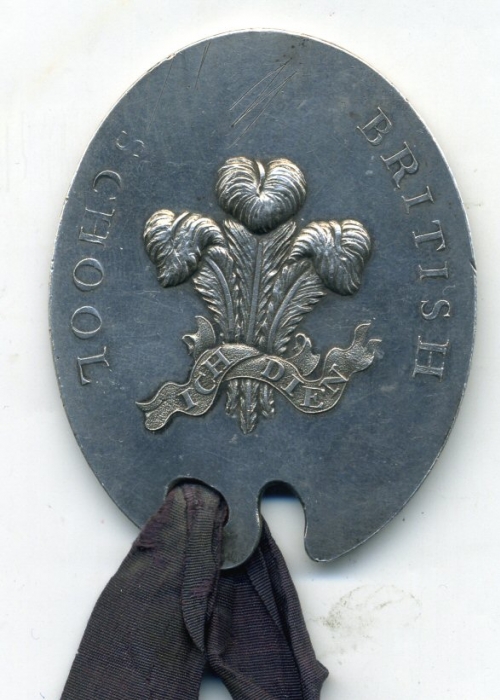 George O'Brien Wyndham, 3rd Earl of Egremont, ( 1751 - 1837), of Petworth House in Sussex. He was a great patron of the arts, befriending the likes of Turner who lived at Petworth for some time and was also an enthusiastic agriculturalist. Egremont was an early investor in the new canal systems.

The painting of the Madonna and Child by Sir Joshua Reynolds from the Bannister Collection is now in Petworth House. Bannister was also a member of the British School.

The British School was established in 1802 by the artist John Thomas Serres (1759-1825) at his house in Berners Street, London. Its purpose was.."for the perpetual exhibition and sale of the original works of modern artists, under the patronage of His Royal Highness the Prince of Wales. The School lasted for only two or three years.
See the ."Memoirs of John Bannister, Comedian, by John Adolphus, printed 1839:-
About this time I suppose for thanks to negligence of letter writers I cannot fix a date, Bannister's early studies turned to his pecuniary advantage. From Sir Joshua Reynolds's sale at Christie's, he had purchased for sixty guineas a picture his discernment taught him to know as a very original of that great master and he sent it to be exhibited and disposed of at the rooms of Mr Serres in Berners Street called The British School, fixing its price at two hundred and fifty guineas. The Earl of Egremont having seen the piece, offered two hundred and Bannister agreed to accept the sum saying that although he was sure he had not asked too much he would not be the means of causing this fine specimen of art to be excluded from the valuable collection a nobleman so distinguished for his taste and the picture was delivered. Soon afterwards, Sir William Beechey was at Lord Egremont's and said 'Oh I know that picture it was Bannister's you gave two hundred and fifty guineas for it and its well worth the money.' The sequel will appear from the following letters, which show on the one hand the noble spirit and dignified liberality of the peer and on the other the justly tempered and honourable feeling of the gentleman: the one conferring a favour with grace, the other accepting it without unbecoming pride or degrading meanness.
Grosvenor Place Friday
'Sir, The more I look at Sir Joshua's Madonna, the more I am convinced that it is one of the finest pictures that ever were painted in any age and well worth the price which Mr Bannister first put upon it and that he ought not to have abated, nor I to have asked for the abatement of a single shilling and I shall not have an easy conscience unless he allows me to pay the remaining fifty guineas. I am going out of town this morning but shall return on Sunday and will call upon you the first opportunity to settle it.
I am Sir Your very humble servant, Egremont.
Addressed to JT Serres Esq.
'Dear Sir, I am much flattered to find that Sir Joshua's excellence is fully equalled by his lordship's liberality and it will afford me no small degree of pleasure to know that the picture must increase in estimation by being in the possession of a nobleman of such acknowledged taste as the Earl of Egremont. Sir William Beechey and other eminent artists considered the picture worth the sum given in at the British School yet I was extremely well satisfied with what I received from you. As I feel I ought not to decline his lordship's kind and generous offer, I beg you will endeavour to convey a due sense of my respect and gratitude on the present occasion.
I remain dear Sir, Very truly yours, J. Bannister.'
Addressed to Collingridge Esq No 7 King's Road

See also: the Prospectus and catalogue of the British School instituted for the perpetual exhibition and sale of the original works of modern artists, under the patronage of His Royal Highness the Prince of Wales. Berners Street. Published 1802, C. Rickaby