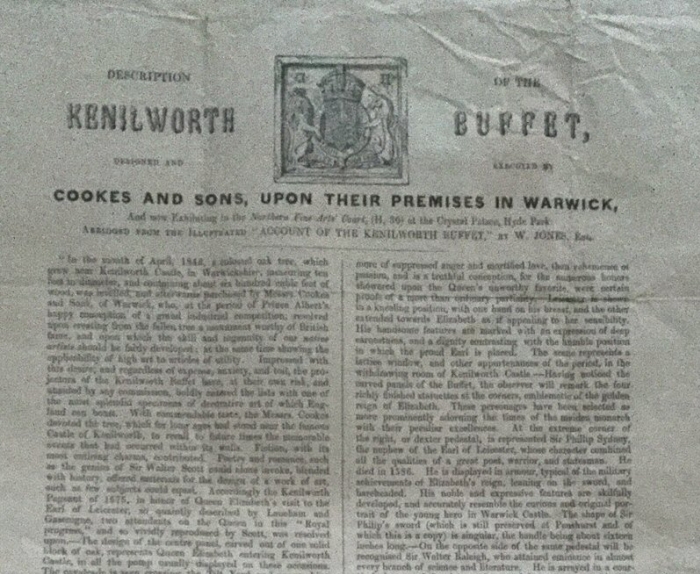 Cookes and Sons of Warwick used as their exhibit for the Great Exhibition the Kenilworth Buffet. The buffet is made from a single oak tree which grew at Kenilworth Castle and was cut down in 1842 and took nine years to construct.
The carvings represent scenes from Sir Walter Scott's historical novel, "Kenilworth". It was published in 1821 and centres on the secret marriage between Robert Dudley, Earl of Leicester and Amy Robsart. The central panel shows the entry of Queen Elizabeth I into Kenilworth Castle through Dudley's gatehouse in 1575 as part of a three-week visit. The left door depicts Elizabeth I meeting Amy Robsart, the first wife of Robert Dudley. Amy died at Cumnor Place, Oxfordshire, in 1560, after falling down some stairs. The right door shows the Queen with Robert Dudley. The four figures are Sir Philip Sidney, Sir Walter Raleigh, William Shakespeare and Sir Francis Drake.

In 1852 the buffet was presented to George Greville, Lord Brooke, as a wedding gift from the people of Warwickshire. The subscribers bought the buffet for £1,200. In 1853, George became the 4th Earl of Warwick and when Queen Victoria visited the castle in 1858, the Kenilworth Buffet was in the State Dining Room.

A handbill issued for the Exhibition reads-
Designed and Executed by Cookes and Sons, upon their Premises in Warwick, And now Exhibiting in the Northern Fine Arts' Court, (H, 30) at the Crystal Palace, Hyde Park. [ H. T. Cooke, Printer, High Street, Warwick.