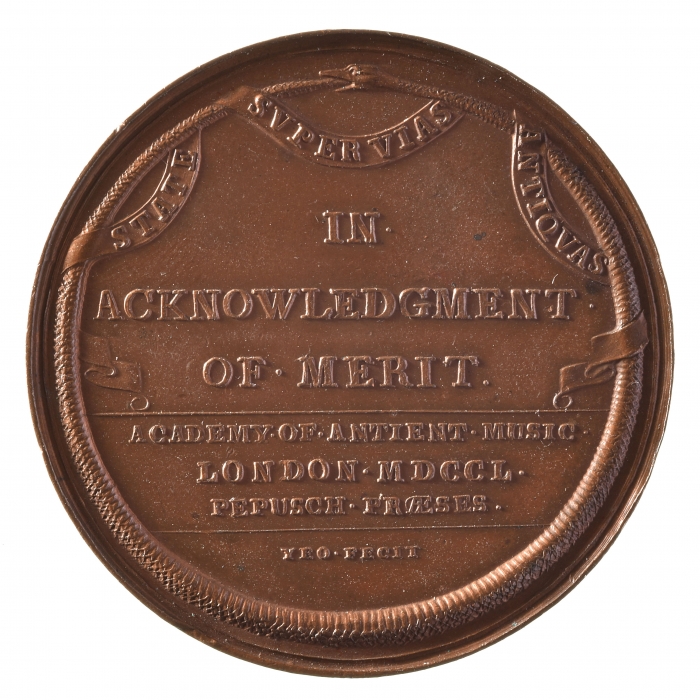 In the year 1710 a number of distinguished musicians and gentlemen formed a plan of founding a society for the study and practice of vocal and instrumental harmony, to be held at the Crown and Anchor Tavern in the Strand. The Society was called the Academy of Ancient Music, and Dr. John Christopher Pepusch, a native of Berlin, was one of its original founders. This institution continued to flourish till the year 1734, when, in consequence of dissension amongst the members, it would probably have been broken up, had not Dr. Pepusch generously undertaken the charge of it, and personally superintended the instruction given to the pupils. This medal was an honorary reward for successful students. The device is copied from a picture by Andrea Sacchi, called "Apollo rewarding Merit and punishing Arrogance."

Richard Yeo RA (ca. 1720 - 1779)
From 1737 Yeo produced silver season tickets for entry to Vauxhall Pleasure Gardens. Other notable works include the official medal commemorating the Duke of Cumberland's victory at the Battle of Culloden in 1746, the medal for the Academy of Ancient Music in 1750, and the Chancellor's Medal for Oxford University in 1752.
In 1749 Yeo began a life-long career at the Royal Mint working as an engraver, becoming chief engraver.
In 1768 he resigned from the Society of Artists to become a Founder Member of the newly-formed Royal Academy. Yeo was one of few early Academicians who were not painters or sculptors.
He exhibited works in plaster, sealing wax and gold in the first two Royal Academy exhibitions, although much of his time was occupied with duties for the Royal Mint. Yeo occupies a prominent position in Johann Zoffany's The Portraits of the Academicians of the Royal Academy (1771-2), where he is seen examining the life model.