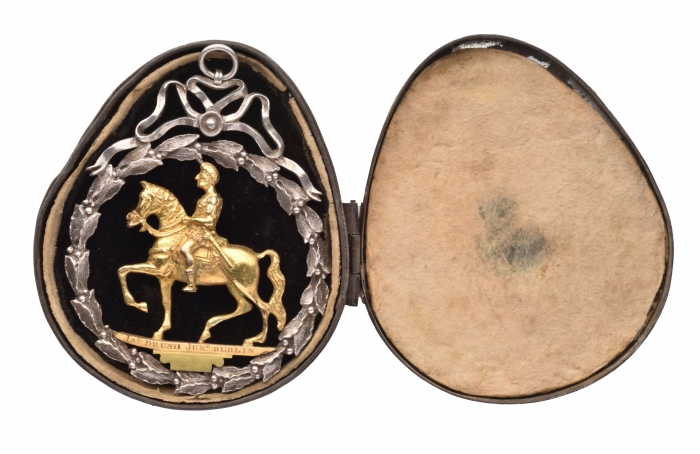 Orange Lodge Ceremonial Badge, silver and gilt, circa 1798, by James brush, armoured equestrian figure of William 111 with plinth below inscribed, Jas. Brush Junr. Dubn, rev. a reverse view of the obverse, Orange Lodge. No. 784. 90 x 70 mm, with loop for suspension in the form of a tied ribbon. Contained in original tin box. Good very fine and very rare. £1850.00

Lodge No. 784 is possibly Londonderry.

James Brush, of no. 7 St. Andrew's Street, silversmith and medallist. Silver pierced and engraved jewels were often worn by Irish Freemasons during the latter half of the eighteenth century and James Brush was quick to recognize a niche market, providing not only jewels worn by members but also Officers jewels and also Past Masters jewels, the latter being presented to the outgoing Master of each Lodge. In his elaborate trade card of 1802, Brush refers to himself and his son as "Masonic Jewellers to the Grand Lodge of Ireland", also advertising "Jewellery Work in the most Correct and Elegant Stile and Medals for Farming and other Societies done with Taste. Brush was himself a member and in 1792, was involved in founding a "Society for the "Schooling of the Orphan Female Children of Distressed Masons", which led to the foundation of the Masonic Female Orphan School", an institution to which he was to become Treasurer. James Brush was also listed as a seal engraver and as a Madeira wine merchant.