The Earl of Leicester Offers Assistance to the United Provinces. 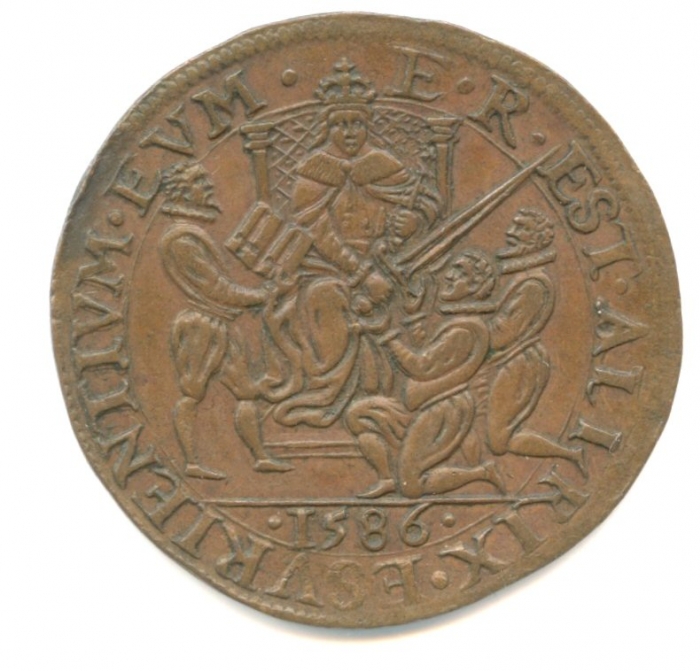 The Earl of Leicester Offers Assistance to the United Provinces. , bronze counter, 1586, enthroned figure of Elizabeth 1 attended by the Earl of Leicester presents a sword to two kneeling figures, E. R. EST. ALTRIX. RESURIENTIUM. EUM. (QUEEN ELIZABETH IS THE NOURISHER OF THOSE WHO HUNGER AFTER HIM, 1586). rev. an upright sword with its tip touching celestial rays, SERMO DEL QUO ENSE ANCIPI ACUTIOR, (THE WORD OF GOD IS SHARPER THAN ANY TWO EDGED SWORD), 30 mm, (MI. 133/87). Good very fine. £275.00

Robert Dudley, 1st Earl of Leicester (1532-1588), was an English statesman and the favourite of Elizabeth I from her accession until his death. He was a suitor for the Queen's hand for many years.
As patron of the Puritan movement, he supported non-conforming preachers but tried to mediate between them and the bishops of the Church of England. A champion also of the international Protestant cause, he led the English campaign in support of the Dutch Revolt (1585ÃƒÂ¢Ã¢â€šÂ¬"87). His acceptance of the post of Governor-General of the United Provinces infuriated Queen Elizabeth. The expedition was a military and political failure, and it ruined the Earl financially.